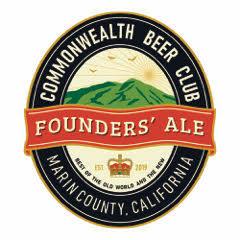 A traditional British Beer and Curry!
To celebrate the summer GBx in partnership with the Commonwealth Beer Club aer marking the launch of the inaugural beer brew from the Commonwealth Beer Club – a traditional British Bitter made in collaboration with Pond Farm Brewery Co.
The Commonwealth Beer Club is a group Brits in the Bay Area (including many GBxers) who have come together to crowd fund real British and International Beer in the Bay – anything but IPA!.  This will be your only opportunity to walk into a bar in the Bay and say “pint of Bitter please” and get what you want.  The hops for this brew are imported from one of the member’s family farm in Herefordshire and the recipe and approach honed with the support of a Master Brewer in London via Toast Ale.
Pond Farm Brewing Co. is a new Tap Room and Micro Brewery in San Rafael creating an eclectic and ever changing range of beers with the Brewery on sight and a great atmosphere.
British Style curry will be available via chefs specially selected and provided by Nextgenchef
This is a public event – please feel free to bring friends and family – flags and British paraphernalia optional but welcome!
Kick off at 6pm