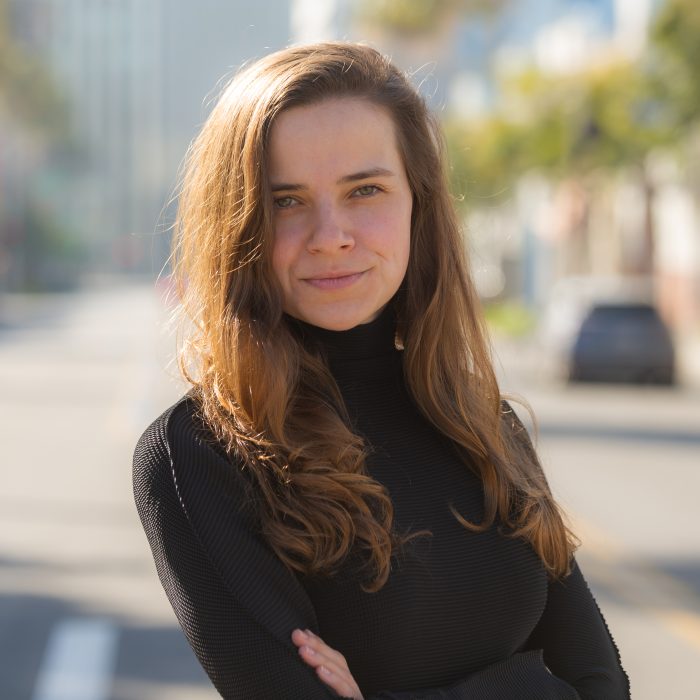 Maria Rioumine always wanted to be an astronaut and explore the unknown, however, she turned out to be a “perpetual immigrant”. Born in Russia and raised in Israel, Rioumine moved to London at the age of 13 to learn English, graduated from Oxford, and worked all around South East Asia.  Rioumine now lives in San Francisco and last year was featured in the Forbes 30 Under 30 list. She is the CEO and co-founder of Agora Systems, a US-based construction technology company that is modernizing the supply chain for commercial trade contractors, or in her words, “a company on a mission to bring construction into the 21st century, making the built environment more efficient and faster to build.”

For Maria, the bridge between being an astronaut and an entrepreneur lay in the willingness to explore new frontiers. It was in high school that her interest in philosophy rose and she decided to study Politics, Philosophy, and Economics at Oxford. While President of the Oxford Union, she was responsible for inviting leaders, activists, and entrepreneurs to talk to the students, and that experience shaped her entrepreneurial thinking.

“[I met people] who said ‘you don’t need to spend 30 years building a career that eventually leads into politics to be able to solve problems, you can actually just solve them in the day to day,’” remembers Rioumine.

While at Oxford, she got a job in business development at AirAsia and worked between Malaysia, Indonesia, and the Philippines. “I did a lot of traveling and when I came back [to London] I went to Goldman Sachs and did M&A in consumer, healthcare, and real estate,” comments Rioumine.

Her journey to America started with a trip to the multiverse festival, Burning Man. She had a few extra days in San Francisco before flying back to London, and a friend of hers suggested that they visit the entrepreneur and investor, Joe Lonsdale, who was starting a new fund (present 8VC). “The next day we drove to Joe’s house in Woodside and we spent an hour talking. At the end of the hour, he said: ‘I think you should consider moving to the U.S. and working together,” recalls Maria, still amazed by the unexpected proposal.

Growing up in Israel, Maria would often hear the Jewish expression “Tikkun Olam”, which she translates as: “a commitment to leaving the world better than you found it”. When Joe offered her a job as his Chief of Staff, Rioumine felt compelled by his argument of disrupting “really old, broken, and unsexy industries” as a way to make a difference in millions of peoples lives.

“Joe referenced [Tikkun Olam] a lot and I was so inspired by his optimism. It felt crazy at the time but I decided this either wasn’t going to work but would be a great story to tell, or that something amazing would actually come from this” recalls Rioumine.

At the age of 23, she decided to quit her full-time job at Goldman Sachs, leave her apartment in London, get a visa and move to the US. “I felt London was more hierarchical, there were different steps that you needed to accomplish before you could move to the next step. I was 23, I had no network in the Bay Area or experience as a tech investor, but here was this pretty incredible person who wanted to take a bet on me,” observes Rioumine.  At 8VC, she worked for two years as Chief of Staff and even co-founded a company called Real Capital Innovation, acquired by Addepar in 2020.

It was at 8VC that Maria met Ryan Gibson, her co-founder at Agora. They both worked at the venture capital firm and lived on the same street in San Francisco. While walking around the city they would often wonder how a place with so much innovation could have a chronic dearth of affordable housing, and by how slowly construction projects moved.

“At a certain point, we decided we needed to understand how we can make the built environment cheaper to build. We both quit our jobs and spent six months trying to figure out why construction was so slow and expensive,” remembers Rioumine.

She recalls sending thousands of messages to anyone on LinkedIn with a title related to construction and inviting them to a 30-minute interview. Maria and her co-founder even showed up on job sites in San Francisco to confirm their hypothesis: how we build needs to be modernized.

“What we saw was that when you build a commercial project, [for example] a hospital, a school, a university campus, an apartment building, up to 40% of your cost is materials — $250bn a year of materials spend in the US is being managed largely with pen and paper,” reveals Rioumine.

Rioumine points out that there’s a lot of rework and manual data entry with little coordination between the teams in the field and the office which leads to huge inefficiencies and waste.

“The complexity of our cities has increased so much in the last 70 years, but the way we build has seen 0% productivity growth since 1947. We’re living in a world where we still rely on pen and paper to build skyscrapers”, describes Maria.

Agora, which is currently processing over $150m of annualized materials spend on their platform, states their goal is to build the “Amazon of construction”.

“We want to make a one-stop-shop for commercial construction companies to find the right materials at the best price, order them, and get them delivered exactly when they need,” envisions Agora’s co-founder.

Their biggest challenge has been to overcome inertia. “When we talk to contractors all over the country, we see some people who don’t want to change. They’ve been doing things in the exact same way for over 30 years”, explains the CEO who is on a mission to build a trustworthy relationship with customers while scaling her company.

With technology, Rioumine believes Agora can make the lives of contractors easier and help them grow their businesses.

“Our customers are often businesses that have grown fast. In many cases, we see customers that make $100M a year in revenue having the exact same problems as companies that make $10M ”, notes Rioumine.

The company is currently focusing on the electrical vertical, and counts clients like Taft Electric, W. Bradley Electric, and RC Power, though Maria reveals that in the future they plan on expanding into other trades.

Looking in retrospect, Maria Rioumine compares the UK entrepreneurial environment with the U.S. and concludes: “In the UK, it can feel like you need to ask for permission to do things; people aren’t as willing to take bets on young people before they’ve proven themselves. I was blown away by the sheer optimism in the U.S. Even if you’re 23 years-old, if you have a great idea for how to solve a problem and are willing to apply yourself to it [someone will give you a chance].”

Maria comments that the UK environment is growing now, but back in 2015, she couldn’t see this type of ecosystem. “Back then that type of optimism didn’t exist much in the UK. A lot of the people that I was surrounded with would talk more about why an idea was more likely not to work than why it would,” recalls Agora’s CEO.

Rioumine’s first interaction with the GBx community was at a GBxx event for female founders. “I just remember thinking ‘oh, people have a similar sense of humor as me: appropriately sarcastic and self-deprecating. I loved talking to people that I felt I could really connect with,” shares Agora’s CEO.

She remembers having a great time attending the Gala and being surprised with the opportunity to network with other British. “I didn’t know that there were so many British people living in the Bay. I maybe knew three, and there I was in a room with hundreds. It’s great and really interesting to meet people who have had a similar experience leaving a place where tech entrepreneurship at the time wasn’t really a thing, and seeing how they’ve adapted in the U.S. and how they’ve overcome challenges,” observes Maria.

Maria Rioumine says she is excited to join Andy McLaughlin OBE (Partner at Uncork Capital) and James Green (Principal at CRV) at the GBx virtual event, “Fundraising for Founders – Raising Seed & Series A – Enterprise” next Thursday (04/01).

“For me [participating at this event] it’s part of paying it forward. I got so much help in moving to the U.S, and learning how to build a company, that if there’s anything I can help other people with that are starting a company, or at seed and Series A stages, I just want to help,” shares Rioumine.