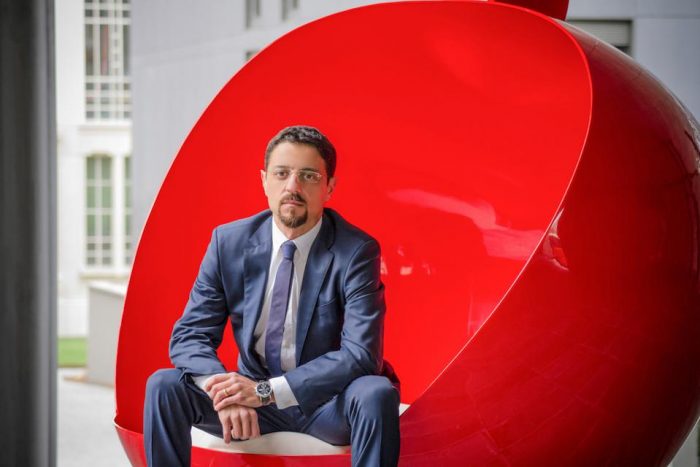 During this time, when entrepreneurs’ creativity is being tested and innovation pushed forward, a London-based company is leading the XR industry by disrupting the way corporations manage training, sales and presentations. VRtuoso has had an impressive 250% growth rate in just the past few months.  “The product didn’t change much pre or post pandemic, but the needs are completely different”, explains Frank Furnari, CEO and co-founder.

VRtuoso is a solution that allows anyone in a company to easily create immersive experiences, thus reducing operational cost, and boosting retention rate to 80%. In April of this year, the company surpassed 1 million users and has delivered more than 500,000 hours of virtual training to its clients, including American Express, BT, Pfizer, and Leonardo Military Defence. VRtuoso has a total seed funding of $1million, backed by Symvan Capital (UK) and Compagnia Bresciana Investimenti S.p.A. – CBI (Italy).

The London-based startup’s success can be attributed to multiple factors, preparation being the most important. VRtuoso’s first two years were entirely dedicated to R&D, and the company currently has 16 patents registered. Furnari and his co-founder Marco Moncalvo did a lot of groundwork before starting fundraising.  “We didn’t want to raise money before we could prove there was market traction. Thanks to our network, in less than 6 months we closed $250K in deals”, recalls Furnari.

VRtuoso is also the result of a decade worth of experience dedicated to serving enterprises, making lots of mistakes, identifying common gaps within a corporation and finding a unique solution to all of them.

The Journey
Frank Furnari is a global citizen used to the “nomad lifestyle”, way before it was trendy. His father was a special forces police officer who fought against the mafia in Italy. “We moved quite a lot across Italy growing up”, remembers Frank who has lived in Israel, Asia, and currently is based in the UK.

He never thought about becoming an entrepreneur, until he got his first job and realized that “a full-time job wasn’t his thing”. After college, he started working for British Telecom (BT) where he would help to develop their first corporate incubator. “I was working with their R&D teams and helping them to spin-off. I would write business models and connect them with the market. One of the companies I helped invited me to join their team. So I quit BT, and we raised $10M from SoftBank”.

Furnari’s first endeavor was a content delivery network that didn’t last long, but taught him a lot. “We burned all the money in three years! Everybody was very young, and the mistakes we made could account for three MBAs”, remembers the VRtuoso CEO.

Frank then decided to apply all the knowledge acquired into his second company: Clarity International. A successful digital design integrator that provides innovative solutions consulting in learning and developing for major corporations. It was his involvement with the Clarity clients that led him to create VRtuoso. “I saw big holes in these companies, and also big opportunities”, says Furnari.

That’s when Furnari put a team together and worked in partnership with Microsoft and BT for two years developing what would become VRtuoso. “I remember walking to our team with two pages of bullet points and telling them ‘I want a solution that fixes all of these problems’”, he remembers.

Scaling the solution
According to Frank Furnari, the top three issues the VRtuoso team was trying to solve were: engagement, knowledge retention, and scalability. “People don’t pay attention to e-learning training, they simply try to guess answers to pass. How do you really engage users in companies such as BT that has 10k employees? How effective is the training?”, questioned VRtuoso’s CEO.

Furnari believes that VR is the solution, and he’s not the only one.  According to a PWC study, VR learners train 4x faster than in the classroom, are 275% more confident to apply skills learned after training, and 3.75 times more emotionally connected to content than classroom learners.

Even though Furnari had all the data and expertise supporting VRtuoso’s value proposition, he used another power argument to convince clients of the efficacy of the product. “My pitch was always a demo session. Once they saw how easy and quick anyone could create a powerpoint to VR, the idea was sold”, remembers Furnari.

Another strong point that VRtuoso offers is its scalability and the operational cost reduction. “To create one single VR immersive experience you would pay around $20k. That’s great, if you want to create one or two experiences a year. But for corporations that are constantly evolving and training global teams that’s a lot!”, explains Frank.

VRtuoso allows instructors to guide, control and moderate VR users’ experiences around the globe, in real time. “Once you create the content, you can distribute among your users, and they can watch it with a VR headset, but also using a PC, mobile and tablet”, comments Furnari on the flexibility of the platform.

Challenges and Competition
As VRtuoso expands, the company operates in the UK, France, Italy, US, Australia, and Middle East, its team faces two main challenges. The first is the cultural shift, as the co-founder and CEO explains, “The main challenge here is to describe VR for enterprises, definitely a topic not as common to discuss with corporations as other technologies”.

The second challenge comes with the pandemic, and the use of VR goggles and headsets, such as Oculus Quest in corporations. “These are shared devices in corporations, so there’s a concern with the hygiene and safety of its use, but we hope to overcome this as we are constantly searching for inventive solutions”, justifies Furnari.

When it comes to competition, Frank is confident: “We have a few competitors in some aspects of the threshold, but if you compare apples to apples we don’t. Plus, we have 16 patents registered right now, so no one can get close to us”.

Future and Networking
With a team of 24 people and “growing like ants”, VRtuoso expects to expand its operations in the US in 2021 and dreams big about the future. “We are after a $38B market by 2026, and we are currently leading VR in enterprise. We want to maintain that leadership and scale. If there will be an IPO or an exit it is hard to say”, comments Furnari.

Joining GBx is part of VRtuoso’s strategic plan to expand in the US. Frank was introduced to the community last year, in a trade mission with London & Partners. “I had the Gala experience and decided to join GBx right away! All the members are bright minded people, but also to the personal and humanitarian point of view”, praises Frank.

As the company prepares another round of investments to support its expansion in America, Furnari hopes to receive the support of his fellow GBx members by connecting with VCs, and other potential investors and clients. In return, Frank kindly shares advice, connections and expertise when scaling outside the US. “International launch is one of our strengths. We also have a lot of experience starting a company from day one to round A”.

Frank has spoken at several conferences and seminars around the world and has given lectures at the Public Relations master’s degree – University of London. He is also co-author of the textbook “Exploring Internal Communication” published by Pearson.

Frank has won numerous awards including the Queen’s Award for Enterprise, Learning & Performance Institute Awards, three BT Innovation Awards, and Best in British Tech Award 2020 in the British Upstart category, by the GBx Brit community in Silicon Valley. Frank is a Humanitarian International staff member at CESVI NPO, a member of the Neuromarketing Science & Business Association and a Corporate Member of the Cambridge Institute for Sustainability Leadership.