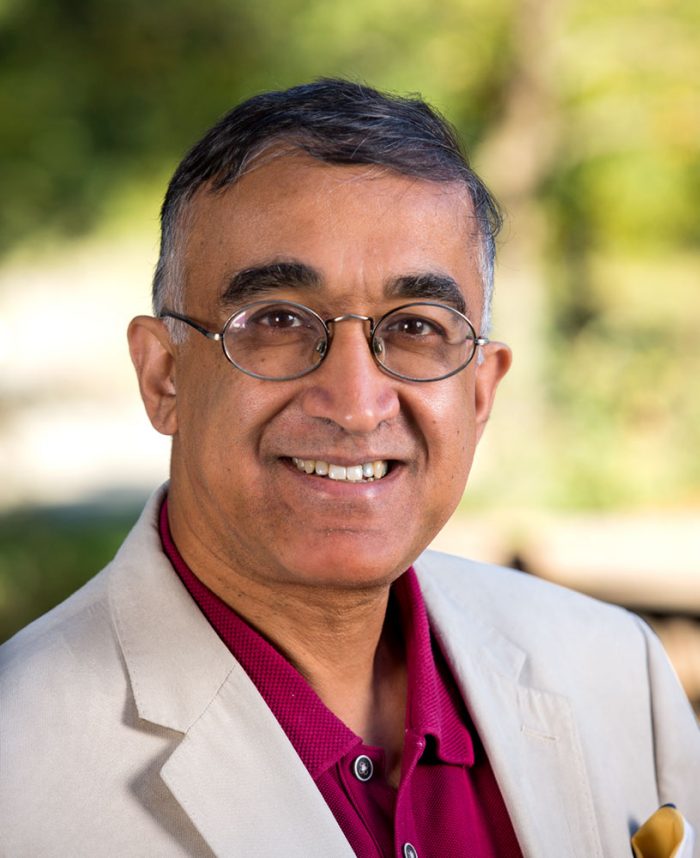 “I wanted to build things that were in ‘Star Trek: The First-Generation’ TV series,” is what you would hear from Dr. Ronjon Nag on why he decided to become an engineer. He is the founder and president of R42 Institute, a U.S. and UK-based group committed to invent, invest and inform about AI and Biotech. He also teaches at Stanford University.

Hailing from the UK, and based in Palo Alto, Ronjon indeed followed his dream and built things a la Star Trek. He has been a pioneer of smartphones and the ‘app stores’ they depend on. He has been working on neural networks – what is now known as deep learning –  at Cambridge, MIT and Stanford for the last 30 years. He built his first speech recognition system as an undergraduate at Birmingham University in 1983.

Ronjon’s companies have been sold to Apple, BlackBerry, and Motorola, and he is a Stanford Distinguished Careers Institute Interdisciplinary Fellow, where he teaches AI and Healthcare Venture Capital. He is a founder/advisor/board member/investor of some 70 start-ups. He was awarded the IET Mountbatten Medal at the Royal Institution for contributions to smartphones, and the $1m Verizon Powerful Answers Prize for Bounce Imaging where is Chairman.

His unique story into the entrepreneurial world has a tight relation with academia: Dr. Ronjon graduated 1st class honors in Electrical Engineering at the University of Birmingham; received his Ph.D. in engineering at Cambridge; at Stanford, he was a Harkness Fellow; and at MIT, he received a Master of Science.  When Ronjon went to MIT, in 1989, and he was working on a handwriting recognition software for bank checks, his research brought him to the Stanford Psychology department, where he worked collectively with mathematicians, engineers, linguists, and physicists trying to figure out a mathematical model of the brain. As the president of R42, he is an advocate of the interdisciplinary roles of the AI field, having experienced the great advantage of collective work in the entrepreneurial world.

In the late 80’s the cold war was coming to an end, and actually this had a ripple effect in the engineering job market. The R42 president was finishing his postdoctoral work and having difficulties finding a job, so he decided to give himself a job by starting his own company.

Lexicus was built by Ronjon and a colleague based on their predictions for the use of handwriting recognition. “At the time, people were building what they called PDAs (Personal Digital Assistants), like the Apple Newton and PalmPilot. The idea was that this predecessor to tablets would replace paper, though interestingly enough, no one was really working on the handwriting recognition part” observed the founder in an interview with The Invested Investor podcast.

Ronjon  invested a mere $500 and managed to get a contract with Apple to build a prototype. At the time, there were only two companies in the world who were working on cursive handwriting recognition.

His work on Lexicus landed him on the cover of Fortune Magazine, and shortly after, Lexicus was acquired by Motorola in the early 1990s.

First App Store and the double down

Ronjon spent over six years at Motorola, and served as a Vice President. He did a lot of work in Chinese, despite not speaking the language. He created a team to develop Chinese handwriting and speech recognition systems for phones as well as a predictive text system that could work with only a 9-key keypad – quite difficult since chinese has 20,000 characters.

Anticipating the migration of the internet to mobile phones, Ronjon decided to leave Motorola and start Cellmania, a company focused on expanding further mobile developments, including, in 1999 a mobile search engine and the first mobile app store. Unlike Lexicus, which was bootstrapped, Cellmania received its first investment from Motorola, and other venture firms, but struggled to find its way into profitability.

The company’s first valuation was at $6.5 million, the second at $100 million in 2002, and then the third was back down to $10 million. “We spent a lot of the money doing various things, including ramping up the staff up to 80 people. By the third valuation, we’d spent most of it. And then in 2002, the dot com bubble burst happened. It didn’t matter who you were, how good you were, no one was writing any checks,” recalled the entrepreneur.

In order to save the company, Ronjon decided to take all the winnings from his first company and invest in Cellmania. The risk was high, but slowly and surely, its mobile app store closed contracts with Orange, AT&T, Telstra, and Sprint. “We got big contracts from mobile operators and built our cash base, but we were so traumatized from having no money that we didn’t spend it.” reveals Ronjon.

With its accumulated cash mountain, Cellmania survived the 2008 financial crisis and then successfully engineered a sale to Blackberry in 2010 who after having a lead in smartphones, were trying to catch up to Google and Apple. “It took 10 times as long as the first company but earned 10 times as much,” celebrated the founder. The experience taught Ronjon a lesson he happily shares with founders: “Come hell or high water, you have to exist until the market wants you and is ready.”

After two years working with Blackberry, where he also served as vice-president, Ronjon started to advise the UK-based Vocal IQ. The company was focused on speech recognition and was acquired by Apple in 2015.

Ronjon Nag has also had a career as an angel investor that started more than two decades ago and now has a portfolio of 60 companies. He started after selling Lexicus, his first venture, and before putting his earnings into Cellmania, the entrepreneur invested in three companies. “I lost all of my money in one, I got 90% of my money back on another, and the third one, which is Cradlepoint, just got acquired by Ericsson for $1.1 billion,” shared the investor with The Invested Investor podcast.

After the loss in one of the companies, which was based in Switzerland, Ronjon established a few strategies as an angel investor. “I want to invest in companies that are at least located in places I go to regularly,” explains Ronjon, who lives in Palo Alto, and runs the MIT angels group in Silicon Valley and is a member of the Cambridge Angels group in the UK.

When it comes to the industries to invest in, Ronjon prefers swimming in the blue ocean. “I like to invest in deeper science, usually there’s less competition. Often the market is not as developed though, but I prefer that rather than going to a crowded market,” contends the R42 founder.

One piece of advice is to get potential customers to fund your prototype before you have it. That way you have some market validation.

As a Stanford Distinguished Careers Institute Interdisciplinary Fellow, he is part of a program that allows participants at a later stage to go back to university. The Stanford Distinguished Careers Institute Interdisciplinary program started based on the assumption that people are living longer and looking for an environment to experiment in to go onto their next career.  “People are graduating at 18-years old for their Bachelor’s degree, and at 22 they get their Master’s, MBA’s at 27, and PhD’s at 28, but when you’re in your 50s, you’ve finished a career or have done a big chunk of it, you’ve still got 30 years left. […] People don’t want to retire. There’s a school of thought that believes that retirement reduces lifespan and does not increase it,” he explains. Ronjon ended up  taking a lot of courses in genomics, biology,  and neurocomputational imaging, which set him up perfectly for helping companies at the intersection of AI and medicine.

He continues to be active at Stanford. He is part of the Boundaries of Humanity Research Program which studies Humans, Animals and Machines in the Age of Biotechnology and also teaches in the Medical School the subjects of longevity science & technology and healthcare venture capital. He also teaches introductory AI classes in the Stanford Continuing Studies program which anyone can attend.

After his experience at Stanford, Ronjon created R42 – a venture firm and an Institute.

The R42 Fund invests in deep science companies both in the US and UK, looking particularly at the intersection of mathematics and biology, including longevity science as well as pure AI companies.

The R42 Institute investigates new technologies, incubate ideas and offers lectures, seminars and workshops. The institute offers the R42 Fellows program which provides a free of charge AI curriculum and a 12 week AI project to people from all of the world – they attend online and work on cutting edge projects like creating a holodeck, Superbio -an AI bioinformatics platform and an AI ethics framework.

Broadening his expertise brings Ronjon not only more knowledge when making investing decisions, but also exposes him to a network of experts, and resources to prototype new ideas.

Ronjon likes being embedded in universities.  He says “Universities are great places to find ideas.. “There are ideas just lying on the floor waiting to be picked up. Universities are good places to go to if you want to be an entrepreneur or an investor because you have experts on every topic within a hundred yards of wherever you’re standing”.

US and UK Ecosystem

Finally, he has some great comments on the US-UK ecosystem. “One thing I like about Silicon Valley is that you have a lot of buyers within a 20-25 minute drive. One of my critiques, by the way, is that British companies don’t buy enough British companies [and] that devalues the ecosystem in Britain,” evaluates Ronjon, the GBx member who invests on the two sides of the pond. He continues, “GBX is a great bridging platform between the US and UK; there are interested successful British entrepreneurs who want an avenue to help British companies and British companies want help from people in the US”.