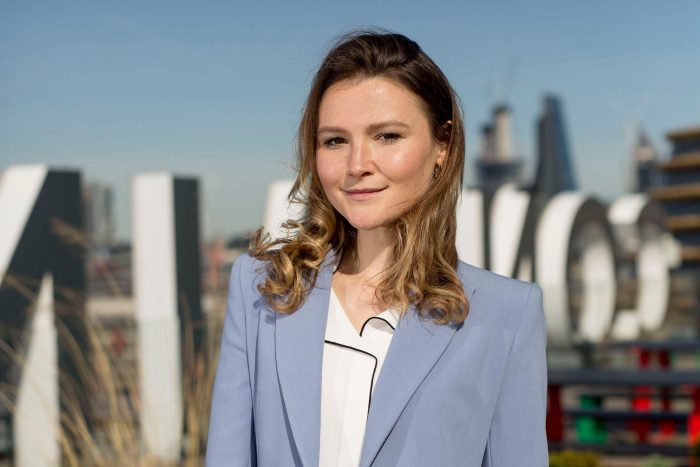 Founder and CEO of Zyper, Amber Atherton is tackling the challenge of helping brands get closer to their true fans and building communities on social media. In January 2021, Zyper was acquired by Discord.

The idea for Zyper came from an online jewelry business called My Flash Trash that Amber started as a teenager. She says she realized early on that most of her sales were made through organic referrals from people who truly loved her brand and products.

“I used to buy all this jewelry from markets in Hong Kong, where I was born, and I would sell it out of my dorm room in England, where I was attending boarding school,” Amber recalls. “I needed to reach more people. So I set up a website where I’d write about trends—basically, it was a fashion blog—and then I added photos of my friends wearing those trendy looks.”

With her jewelry e-commerce site, Amber became one of the pioneers in combining online content marketing with brand community building. She had done some modeling gigs that had helped her develop a network of relationships with fashion professionals and celebrities. Soon, My Flash Trash began to get attention from the press and designers began asking her to display their products on her site. She got her first angel investment when she was 18, and decided to take a year off from college.

The online jewelry business really took off in 2011, shortly after Made in Chelsea, a reality show Amber had participated in, first aired. The show drove awareness and sales to My Flash Trash and by 2015, the company had a valuation of £3.5 million. The Daily Mail UK reported that Rihanna and Beyoncé were fans. In 2016, My Flash Trash was acquired for an undisclosed sum by Hong Kong–based NFTT Group.

“What we realized with e-commerce was that it wasn’t about influencers—it was about all the cool everyday customers who were very connected and could drive their friends to be new customers,” Amber says.

Scaling Up While Flying Solo

While still retaining a stake in My Flash Trash, Atherton raised $1 million in seed funding in London to launch Zyper and in 2017, she became the first solo female founder without a technical background to be accepted by Y Combinator. Having been an entrepreneur since childhood, Amber says, “It never occurred to me to have a cofounder.”

In a 2014 interview with Elle, Amber recounted how her father, a pilot, was obsessed with computers and had taught her how to code when she was very young. Throughout her childhood, she had set up various businesses online, including launching an animated e-cards business when she was just 13.

With My Flash Trash, Amber had been able to create a community around the brand and get organic referrals from happy customers. It was an early prototype for Zyper, she says. A friend who works at Nike noted the value of the new business and helped Amber sign her first Zyper contract. Now, the company proudly works with major international names such as Unilever, Calvin Klein, Lyft, Toms, Dior, Lancôme and L’Oréal.

Zyper’s software platform works by identifying a brand’s superfans (who are often Gen Z and millennial micro-influencers with a small but highly engaged online following) and then working with those micro-influencers as they create and scale a strong brand community. Forbes noted in 2017 that the average brand superfan identified by Zyper’s software has about 400 followers, but a high engagement rate and a steady track record of creating original content. “We use complex queries, natural language processing and computer vision to identify the top 1% of fans of a brand,” explains Amber.

Once those micro-influencers are onboarded, the brand typically sends them product samples and encourages them to get creative. “It’s a hybrid loyalty program where people get rewarded with products. Money can’t buy these exclusive experiences,” Amber says. “Fans provide insights like in a focus group. And, of course, they drive sales,” she adds.

The Future: Disrupting the Marketing Industry

Zyper currently has 29 team members working in San Francisco, New York and London. Amber says one of the company’s biggest challenges is to maintain the balance between rapid growth and the well-being of all the people on the team. The company’s next step is to launch the Zyper app, so that more brand fans can join the platform. As of now, members need to be invited to be a part of the Zyper community, but the ultimate goal for Zyper is to go public.

“I think every American shareholder should be part of this revolution, owning that data and helping decentralize advertising,” Amber says.

Contributing to the GBx Community

Having started many companies in the UK, Amber’s decision to move to the U.S. was based on the desire to scale her business.

“The U.S. offers better access to capital and talent,” she says. “I think Europe is improving, and London is by far the best European source of capital, but the market size in the U.S. compelled us to make the move. We knew it would allow us to scale within the time frame we had set for ourselves.”

For someone passionate about building connections, it was only a matter of time before Amber would join the GBx community. She attended the GBx Gala last year and then developed a strong bond with other GBxers.

“The Brits in the Bay Area are such a supportive community, whether you are a first-time founder or have already IPOed two companies,” she says. “There’s this incredible bond between British people here because we all want to make something amazing, so everyone is friendly and supportive and willing to give advice.”

Amber has shared her own expertise with the GBx community through AMA sessions and Happy Hour with Founders. Whether through her own company or with other GBxers, she is always focused on building community.