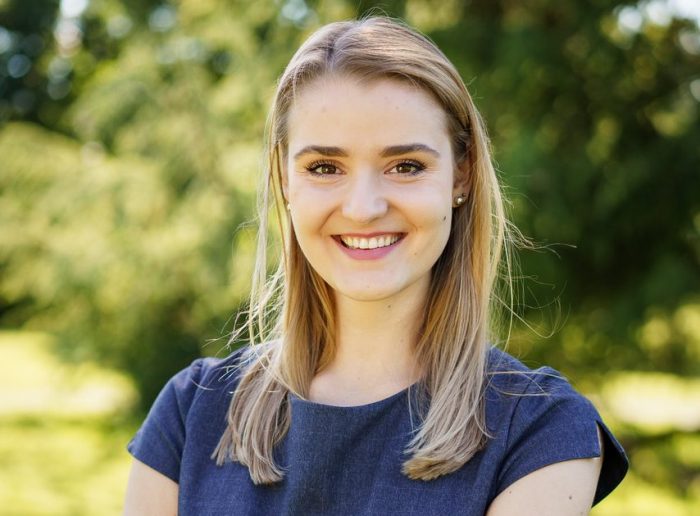 The GBxx community won itself one more advocate in promoting women in tech when Aleksandra Pedraszewska joined our community. The Polish-born entrepreneur is the recipient of numerous prizes and scholarships, including Female Undergraduate of the Year 2015, and Cambridge Leadership Prize, and she was named on the Forbes 30 under 30 Europe list. Aleksandra is also the co-founder and Chief Operating Officer at VividQ, a UK-based deep-tech startup that has just raised $15 million to develop its hologram technology for next-generation digital displays. The funding round was led by UTokyo IPC, the venture investment arm of the University of Tokyo, with participation from Foresight Williams Technology, Japanese Miyako Capital, APEX Ventures from Austria, and the R42 Group VC out of Stanford (led by GBxer – Dr. Ronjon Nag!).

Aleksandra co-founded VividQ with another GBxer, Darran Milne, alongside 4 technical co-founders, who she met while completing her MPhil degree in Technology Policy at Cambridge Judge Business School. Today, she heads up VividQ’s sales, marketing, and operations teams based in London. She also overlooks the implementation of the VividQ software framework used by world-leading consumer electronics and embedded systems manufacturers, and the U.S. and APAC expansion.

Aleksandra comes from a medical family, but growing up she was driven towards Social Sciences. “I was always more interested in the world around me rather than inside me”, explained the co-founder. She completed her International Baccalaureate in Poland, and then moved to the UK, where she studied Land Economy (a combination of law, economics and policy) at the University of Cambridge. She decided to grow her career in a technology industry after working on her thesis on how cities can inspire more innovation. A year later, when completing her Masters degree in Technology Policy and Management, she met a “fascinating group of people who were working on a new revolutionary solution for digital displays.” They are now her co-founding team at VividQ.

The Polish entrepreneur Andrzej Kaczorowski, current Chief of Science at VividQ, was among the members of the group. He was finishing his Ph.D. in holographic engineering while working on a commercial project at the Photonics department at Cambridge when he introduced Aleksandra to his colleagues. The project didn’t pan out but inspired the group to focus on digital applications of holography, combining their knowledge of quantum computing, engineering, math, and software development. The result was a super-efficient algorithm for computing 3D holograms.

“It used to be a heavily computational process that required a few hours and a stack of GPUs (Graphic Processing Unit) to generate one static 3D projection. Thanks to the new algorithm, the team managed to achieve a real-time holographic projection using the university broadband, making the process almost 1,500 times quicker than anything ever achieved before. That was the real Eureka moment!,” shares the co-founder and COO of VividQ.

Aleksandra, with her experience in public speaking and project management, joined the group with the mission to communicate to the world what they were building. “The team was already working with a London-based angel investor Eduardo Bundyra and developed the first pitch: ‘if we make this technology happen, you will never need a TV or computer monitor, you will project information in 3D in mid-air’. And this was not an overstatement, it’s literally what we have been creating,” shares the COO of VividQ.

The company closed their first funding round led by Essex Innovation in 2017. Aleksandra was 23 and still finishing her Masters degree. The capital raised led VividQ to dedicate their first year to building their flagship software product, hire first technical team members, based in Cambridge, and build up the commercial team in London.

The co-founder remembered some of the challenges of the early days when VividQ established their business model based on licensing its software framework and hardware designs. “We were pulled in different directions by different people, with many advising us to build complete display devices to raise money more easily. We decided to stay a licensing company because software and its applications is where our expertise lies and how we can scale the business more easily,” admitted the co-founder.

Several factors contributed to the validation of VividQ. One of them was timing. “We started the company just after Facebook bought Oculus and everyone was playing Pokemon Go. People started to realize the great potential of Augmented and Virtual Reality. This opened up huge opportunities for us as providers of solutions for holographic displays, which go way beyond AR and VR,” says Aleksandra.

With the UK/Irish investor group Sure Valley Ventures on board, VividQ started to develop its global strategy. “We started to look towards the U.S. because we wanted to find partners who could help us take this technology to maturity,” remembers VividQ’s COO. Aleksandra recalls facing difficulties launching their first funding deal in the U.S. due to the company being based in the UK. “People would still say that if we were serious about raising funds in the U.S., we should build our network there, and that’s what Darran and I started to do back in 2019,” added the co-founder.

As part of the global expansion, VividQ brought a strategic partner to the game: the German-based Fluxunit, who are a venture arm of Osram – one of the biggest lighting technologies developers. “Holography is nothing else but engineering of light so it was a perfect match” celebrated Aleksandra.

At the same time, VividQ started to notice more traction in the Asia-Pacific region, and they brought a Japanese VC UTEC on board. “The majority of our commercial projects are based in the APAC region right now. We just made our first external hire outside of the UK, and surprisingly, it was not in the U.S., but in Tokyo,” comments VividQ’s COO.

The company currently has a team of 37 employees, plus the General Manager for APAC, and it’s scaling at speed. “We are literally 14 months away from having holographic displays in everyone’s car,” estimated Aleksandra. She predicts that many consumers won’t even realise that they interact with holograms on a daily basis, but the success in the automotive sector will guarantee that holographic displays become a mass market technology. “We’re not going to be looking at the same screens we’re looking at today in four years. There are specific steps that device manufacturers are taking to make that happen. Once we get there, there’s no turning back” says the co-founder.
VividQ’s July announcement of a $15M investment round will help to make this happen, by expanding their presence in the U.S. amongst other key milestones “We already have ongoing projects and paying customers in the U.S., and if it wasn’t for COVID, we would already have an office in the Bay area by now”, shares Aleksandra.

Once a British company lands in the U.S, GBx is the premier community to be involved with. Aleksandra and her co-founder Darran Milne were introduced to GBx thanks to our partners Wilson Sonsini who invited VividQ for the 2019 Brits By the Bay programme and to the Gala. “We’ve had so many wonderful conversations at GBX events! I appreciate how honest and open everyone has been about how building a business in the U.S. out of the UK can be challenging,” commented Aleksandra.

The connections VividQ made at GBx events went a long way, as the co-founder confirmed: “During one of the GBx lunches we learnt that another British company that had already moved to the U.S was working with the same customer as us, and we are hoping to combine our expertise in the future.”

Aleksandra added about the opportunity to talk to other founders who are further in their U.S. journey, “It’s just great to have someone there that we can ask about everything from the most boring accounting and legal questions, to introductions to senior management at companies we want to work with. There might be no money following up from a conversation straightaway, but there is a tremendous value in just so many other currencies,” finalizes the co-founder.