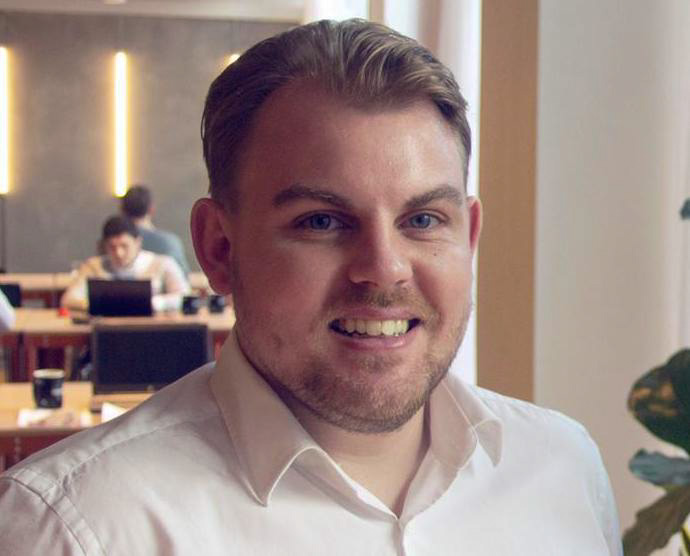 Years before diversity and inclusion training became trending in the post-pandemic workplace, Adam Mitcheson was interested in developing opportunities for people to grow and thrive at their jobs. He had experienced the bitter taste of toxic work environments before, and escaped from it by attending a mentoring program. “It was life changing”, recalls the co-founder of my2be, a Manchester-based platform that uses AI and Machine Learning to deliver mentoring at scale while helping users reach their full potential. The company counts with customers across Europe and the US, including names such as Box and Opencast platform.

Mitcheson grew up in Manchester and dreamt of becoming a professional football player, but ended up going to university and getting a business degree almost by accident. “After leaving school, the job I went into required me to attend University of Salford one day a week. I soon realized that neither the job nor the course were a good fit for me, but I still didn’t really know what I wanted from a career. So I decided to switch courses to a Business Degree and go [to school] full time, to keep my options open whilst I tried to work out what it was I wanted to do”, shared Mitcheson.

Soon after Mitcheson received his diploma in 2008, he watched the world turn upside down with the housing crisis. “It was tough. I had odd jobs, but nothing substantial”, recalls the entrepreneur.

In 2010, he scored an entry level position at the BNY Mellon branch in Manchester, and hoped to one day reside in the Big Apple – but things took a different path.

Scratching his own itch: the entrepreneurial path
Adam quickly realized he wasn’t happy with the bureaucracy of the financial world. His biggest challenges were reading long procedures and reporting his performance on a monthly basis.

“I’m a visual learner. It was frustrating to dig out procedures for two hours when we could have a video tutorial showing how to do something in 30 seconds”, argued Mitcheson. It was this discomfort that led him to improvise a solution for his personal use. “It was basically a powerpoint with voice over. I screenshot every single step of the process, filmed and did the voice over in my own time,” recalls Mitcheson. His creative solution, that included a personal log for performance stats, ended up being used by the bank to train multiple employees even in other countries, like India.

After a couple of years at BNY Mellon, Mitcheson moved from an operational role to an account management role, and that’s when he decided to look into becoming a financial advisor and ultimately work for himself.

“Every time I had a question [about financial advisory] I’ve tried to find the answer on the internal intranet or I would ask managers, but I just got knocked back”, commented Mitcheson. That’s when he decided to join the bank mentoring program, where he finally found the answers he had been seeking.  “It was a game changer to be connected to the right people who could help me on my journey,” said Mitcheson.

The experience at the mentoring program sparked a new idea in Mitcheson’s mind. “This was my ‘lightbulb moment’ – to create an online platform where other people in the same position as myself could find answers to their questions by connecting with the right mentors”, explained my2be co-founder.

The early days of my2be
Mitcheson knew that technology was the only way to help others to reach their best potential, increase talent retention in companies, and to do it all at scale. Despite not being a “technical person”, he found a way to build the solution he had envisioned. “I gatecrashed the Manchester University Hackathon  and found a couple of students who I thought could help me to build my MVP. They worked over the summer and that worked out great,” recalled Mitcheson, who soon after quit his job at the bank in 2015 to dedicate himself full-time to the project.

“I didn’t see it as the craziest leap of faith. I was actually very methodical about it. I moved back with my parents, but got ruthless efficiency working from home. I was doing 12 hours a day of work, and started taking meetings to present the product,” remembered Mitcheson.

As a passionate founder in his early days of startup, Mitcheson was eager to find my2be’s first investors.  While attending a networking event, he was particularly interested in introducing the company to Scott Fletcher, the founder of ANS Group and an angel investor in Manchester. “When I finally spotted him on his own, he was leaving the party and waiting for the lift. And Scott said: Come on, you’ve got three floors, get in,” recalled my2be co-founder.

And that was literally what happened: Mitcheson gave an elevator pitch to his first investor in a lift ride. “I don’t know what I actually said, I just remember that when we got to the bottom [level], he asked how committed I was to the project and I said ‘I’m all in, I’ve sold my car, I’ve moved home, I’ve quit my job’. That’s when he said we’ll have a chat and that was it: our first investor,” remembered Mitcheson.

The other side of my2be’s investment was a partnership with a development agency who, according to Mitcheson, “brought a team and scrapped the original MVP”. The alliance was shaken, the agency got acquired, and Mitcheson saw his company at a crossroad. “There were red flags that I didn’t act upon, perhaps for being a bit naive and a first time entrepreneur,” admits Mitcheson.

At the 11th hour, the investor decided not to come back in, and that was enough motivation to get Mitcheson started on a desperate search for a co-founder. Serendipity or not, he ran into Damien Shiells, a good friend and known-founder in the entrepreneurial Manchester scene, who was leaving his company (Twine) and looking for another opportunity. “I told him I was looking for a technical co-founder and explained where my2be was and everything we could do together. On the same night, we’re on the phone with Scott, who reinvested” shared Mitcheson.

Silicon Valley lessons
Around the time all these transformations were happening in the company, Mitcheson envisioned a future for my2be in America. He attended Brits By The Bay, an official GBx event in San Francisco, and still counts the great outcomes of the connections made during this time. “I met a lot of people who told me not to get a developing agency and to find a technical co-founder. Today I know how amazing that advice is”, remembered Mitcheson, who also met his first U.S. client during a GBx happy-hour.

“I met [GBxer] Ian Storrar from Box, and we talked about working together. We kept in touch, and last year we managed to make it happen: Box is our first major client in the US,” celebrated Mitcheson, also announcing that Box had renewed their contract and agreed to expand their use of my2be globally within the organization.

Thanks to another GBx connection, Nicole Quinn, Partner at Lightspeed Venture Partners, while in the U.S., my2be’s co-founder was gifted with tickets to attend TechCrunch’s Disrupt and BoxWorks Digital event. “It was a Road of Damascus moment for me going to those conferences,” recalled Mitcheson. He was surprised to see logos of companies such as Slack, Zoom and Okta lined up with Box at the Moscone Center, where Box’s event was hosted. “When I realized that they were collaborating, I thought that was very clever, because they were uniting the best of content collaboration, the best of security and data verification with the best of video. Why would you build your own [separate] thing when you can just integrate and work together?”, recalled Mitcheson. This mindset was immediately embedded into my2be. “We want to be the fat logo alongside that is the best in people development”, shared the co-founder.

Mitcheson had another mindset shift while talking to GBxer Andy McLoughlin about the necessity to be in the U.S. in order to attract American customers and investors. “Everyone that I had talked to said ‘you have to be here’, and what I was hearing from Andy was something completely different”, explained Mitcheson. my2be is a Manchester-based company and has a team of five, including Matthew Stammers, another GBxer and my2be’s U.S. representative. Mitcheson adds that one of their biggest advantages is the cost-benefit of having their tech team in Manchester as opposed to Silicon Valley.

Next step
The pandemic exposed the need for companies to adapt to the remote work environment while providing equal development opportunities for diversity and talent development teams. my2be tackles both ends as it allows people to discover their talents and potential while creating a supportive community of mentors and mentees across organizations. Or as Mitcheson puts it, my2be is “a people success platform focused on creating equal opportunities for developing and nurturing people”.

As a mission driven organization, Mitcheson highlighted my2be’s impact on one of the former employees at Box, now working at Zoom. Stephanie Kong grew up in an abusive home and it was only while participating in the mentoring program of my2be at Box that she found the courage to ask for help. “Those are the things that remind you about what you’re doing and why you are doing it”, said Mitcheson after sharing Stephanie’s story.

my2be is currently expanding its footprint in the U.S. and plans to run another round of investments in the near future. Adam Mitcheson is keen to connect with other GBxers interested in facilitating personal development for their teams, and with new founders battling on the tough road of finding first investors and clients.