Fundraising in a Downturn: Lessons from Unicorn Founders and VC 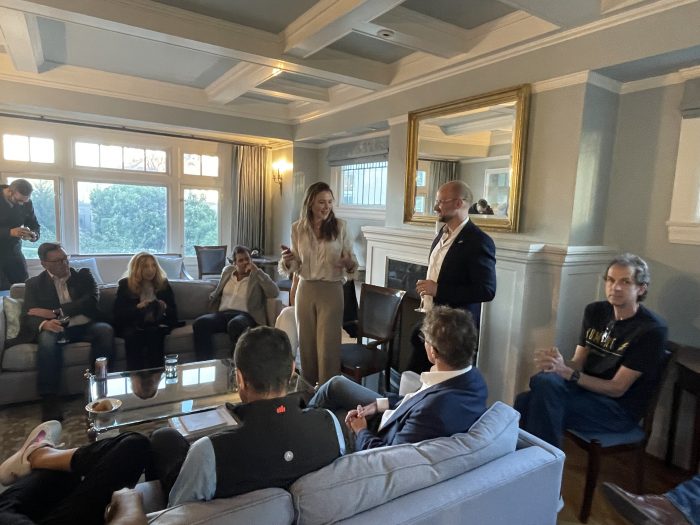 The first installment of our GBx Salon Series was held on Thursday 22 Sept at the British Residence, with great success.

We’d also like to thank our esteemed cast of speakers for sharing such thoughtful insights:

How do you foresee the global downturn in the latter part of 2022 and Q1 2023 impacting investment?

Kevin Hartz: Focus on the micro (ignore macro predictions). Find great founders and you will grow. I invested in Trulia (founder Pete Flint) in 2005, running into a housing crisis. Trulia continued to grow despite the macro picture and it proved a very sound investment!

Janice Roberts: From an investment perspective, find the right entrepreneur with the right idea and you’ll be okay. In a downturn there is more due diligence, deals take longer.  Syndication on investments occurs to spread risk. Growth stage might be the riskiest space and where challenges are.”

Gerald Brady: Deal volume is 40% down in Q3 vs in Q2, but there is no change in seed and early stage investment. Security software remains strong.  Energy is a hot sector because of the war in Ukraine. Carbon capture is a booming area, as is supply chain and frontier technology.

To conclude: There is dry powder in VC funds, and they are still allocating it to the best founders solving the biggest problems.

Are you seeing pressure to deploy funds from fund managers?

Gerald Brady: We are seeing the biggest year for fundraising despite the macro economic environment.

This is an epic era for investors. The best companies will be funded in this period if it follows historic precedent.

Kevin Hartz: It is also a wonderful time to be a founder, because there are a proliferation of funds versus at the start of the era. Seqouia and other big VCs do not have a monopoly anymore, so they have to pay more for the best opportunities, and founders have more choice.

Sam Chaudhary: I agree. My company, ClassDojo, closed a Series D round last quarter. We are not considering an IPO at this stage. Rather as we enter a period of macro economic decline, we are not touching this latest round for now. We can run the business cash positive if needed, and that is our plan.

Lisa Wehden: I’m not sure I would say pressure but rather there are some key themes emerging in investment. Community building is a hot topic and we have seen a growth of “seed +” rounds.  Climate tech (with its Watershed, billion dollar valuation) and carbon extraction are hot topics.

Gerald Brady: There is a big difference between European and US VC. European funds have drastically reduced investment. US funds see this time as an opportunity.

What specific actions can UK founders take to make them attractive to US founders?

Anand Shah: The distinction between UK founders based in the US or in the UK needs to be added here.

The UK is trying to close the gap with the US, the good news is way ahead of the rest of the world.

Gerald Brady: It depends on the industry also. For B2B software, it is harder to sell to corporations and the government in the UK, whereas in the US it is easier to do and scale.

Janice Roberts: I don’t see why companies leaving the UK is such a big deal. Israeli companies move to Silicon Valley but Israel still has a strong reputation in cyber. There is a symbiotic relationship: Israel founders come to the US to learn and expand, they make significant gains, and then reinvest in Israel.

Differences between fundraising US and UK

Lisa Wehden: There is a ton of intellectual capital in the UK that struggles to meet the investment that would be available in the US, for example Oxford Biotech research. We need to identify and exploit opportunities to leverage this – via university interchange, visas and secondments.

(opened up to the room)

Risk capital is far less common in the UK than in the US, so it inevitably takes longer to strike a deal.

The US is a more fertile investment and scaling market, effort yields ten times the impact and scale in the US than in the UK.

Saying that, the UK is perhaps ten years ahead of Germany and France, though perhaps 50 years behind Silicon Valley. The UK is only just starting to see the 2nd and 3rd waves of reinvestment from successful founders into the next generation, for example Skype investing into Wise (Transferwise)…

As it always has, Silicon Valley still breathes opportunity. In the US a higher propensity of fund managers in VC are ex-founders than in Europe, so they get the founder journey better. The density of the network in SF is incomparable.