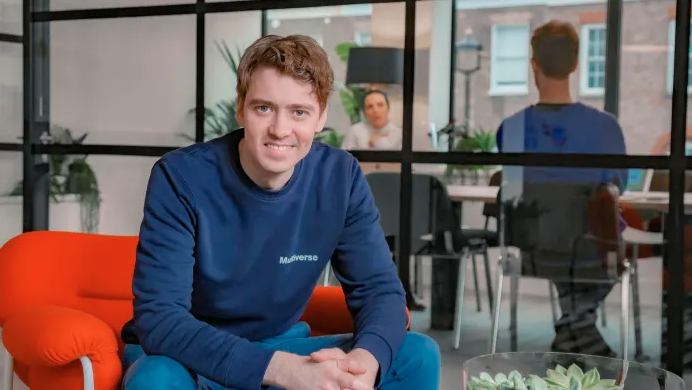 Tony Blair’s ambition for half of young adults to go into higher education was reached in 2019, almost 20 years after the former Prime Minister made the call to send people to university. Meanwhile, his eldest son, Euan Blair is disrupting this idea through his ed-tech start-up, Multiverse. The UK-based company bets on apprenticeships to solve the broken college system. Originally founded as WhiteHat, Multiverse raised a $44 million Series B round, the largest EdTech raise in UK history. The funding is being used to expand into the U.S. market after attracting nearly 300 clients in the U.K. (among them Salesforce, Facebook, Morgan Stanley, Citi and Microsoft) and five thousand apprentices. Multiverse is backed by General Catalyst, with participation from Google Ventures, Audacious Ventures, Latitude, SemperVirens, Index Ventures, and Lightspeed Venture Partners.

Multiverse’s vision is to promote a revolution in higher education, encouraging high school graduates to take apprenticeships instead of going to university, accumulating debt and, occasionally, useless degrees. The company finds an encouraging scenario to thrive in, with more than 7.2 million job openings in the U.S. in 2019 unable to be filled due to a growing skills gap in the workforce. The World Economic Forum predicts that closing this gap by 2028 could boost the global GDP by $11.5 trillion.

Multiverse founder Euan Blair, in an interview with Bloomberg, added other components to build the case for apprenticeship programs as a promising route to tackle the skills gap. “The college dropout rate is at 40% [in the U.S.], (university) enrollments are falling, particularly post-pandemic as they’re hugely expensive, [on top of that] minority groups have been continually underrepresented, and at the same time every company is dealing with huge amounts of digital transformation,” explained Multiverse co-founder and CEO.

Former Prime Minister Blair is also behind his son, according to the Times. He recognises that universities are not the solution they had once seemed. “At the time, it felt like the best way to give people access to opportunity, but it has not worked out like that,” Mr. Blair said.

Euan Blair is a former Morgan Stanley banker who decided to leave investment banking in 2016 to do something “more socially motivated”. He graduated in Ancient History at Bristol and completed a master’s degree in International Relations at Yale. He served as an intern in the US Congress before joining Morgan Stanley’s graduate programme in 2008 (just weeks ahead of the financial crash). On banking, he said: “I found it really interesting but I didn’t love it, so I wanted to do something more aligned to policy areas I was interested in: employment and education.”

Then in 2016, he founded Multiverse as he noticed how increasingly prohibitive universities had become, and how apprenticeships could offer a solution for diversity and skill challenges in organizations. “If employers only look at those with college degrees, they automatically screen out 70% of the LatinX population and 67% of the black population. On top of that, colleges aren’t even teaching people the skills that will enable them to be successful in their careers. We simply can’t keep up with the pace of digital transformation,” said Euan Blair.

One early joiner was  Sophie Ruddock, a former impact investor and consultant who now takes charge of Multiverse in North America. As VP and GM of North America at Multiverse, Sophie maintains that apprenticeships are the best way to develop the tech skills demanded by modern workplaces: skills in software engineering, data science and digital marketing. “It’s no wonder that in 2021 there is real momentum behind professional apprenticeships. We’ve seen the Biden Administration commit to investing $50 billion in training and apprenticeships, while some of the world’s best employers (IBM, Google and Walmart) have thrown themselves behind apprenticeships and applied learning,” she wrote in an article for Nasdaq.

Multiverse’s apprenticeship program is currently tackling the growing areas of data, software engineering and business operations, among others. The company does the sourcing and the matching, and then identifies potential candidates, as US General Manager  Sophie Ruddock explained in an interview with Benzinga:

“That’s done through our recruitment platform that looks to surface skills, behaviors, desires, competencies like grit, conscientiousness, interpersonal skills, and really tear up the traditional resume.”

The system also enables past behaviors, past performance to be surfaced, instead of which college the candidate attended or what was his/her GPA, said Ruddock.

Multiverse then uses an algorithmically-assisted “smart matching” process to link talent to companies and specific roles. At the end of the process, ambitious, job-seeking talents are offered a paid, full-time role with access to subject matter taught by experts who have worked in the industry, and know how to teach a curriculum designed to impart knowledge, as well as skills and behavior.

The company’s model is also tapping into an urgent workforce issue: diversity. Euan said in an interview with TechCrunch, that currently over half of the people making their way through Multiverse are people of color, and 57% are women. The plan is to build tools to make that an even firmer part of its mission.

Multiverse’s apprenticeships typically take 1.5 years and connect candidates through a network of apprentices and alumni in virtual events, interest groups, and other activities. The program has no cost for candidates, who actually get paid by the companies providing the apprenticeships. Multiverse charges the companies it works with according to the type of qualification program they need, “but are broadly around the $15,000 mark,” said Euan to TechCrunch.

As the company scales, Multiverse’s attention has been in the education of and delivery of their services, as GBxer and Regional Director at Multiverse, Mae Rogers explains: “In every conversation we need to explain what professional apprenticeship is. Everybody knows what blue collar apprenticeships are, and what we are doing is basically trading the apprenticeship model and applying it to roles in digital and tech where it makes more sense.”

Rogers also talked about the challenge of growing at a fast pace: finding enough experts in the industry able to sustain Multiverse’s quality coaching program.  “We have someone like Marta Rodriguez Martinez who’s one of our data coaches. She led an AI team at Microsoft for 10 years, but she always had a passion for teaching. So our question is: Are we going to be able to find enough of that caliber of coaches in a short enough time as we scale?,” says Rogers in an interview to GBx.

Multiverse has a team of 15 people in the US, between New York and the Bay Area, but the plan is to be all over the States. “Most of our conversations right now are in Atlanta (Georgia), Dallas (Texas), and Raleigh (North Carolina). I think we will have people everywhere once we go back to an in-person world,” predicts Rogers.

You can connect with Mae Rogers on GBx Directory, GBx Slack, or LinkedIn.