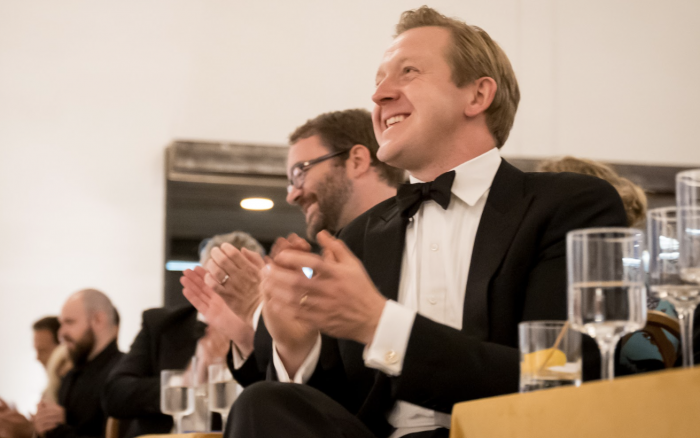 It’s time to celebrate the Brits who stand out by innovating and growing their business on a fast track! The nominees of 2020 deserve a special shout out as this has been a challenging year for many industries.

As the tradition goes, every year the GBx Best in British Tech award celebrates companies and founders for their outstanding impact across innovation, business scale and global impact, all whilst contributing to their community.  With awards to be announced at our first ever Brits by the Bay Virtual, we’ve expanded the categories to recognize even more success stories across the UK and the US, with both early and later stage companies included.

ClassDojo and Calm are some of the successful companies that have taken this accolade home in previous years.

Who will win the 2020 Best British in Tech Awards?

Meet our 2020 nominees, choose your favorite one and vote! Don’t forget –  only GBx members are eligible to vote.

British Upstart (UK-headquartered pre-series A, expanding into the US)

Ferly
Launched in 2019, Ferly is a FemTech company that offers the first digital therapeutic for sexual wellbeing. Their app uses mindfulness based Cognitive Behavioral Therapy to empower women to overcome, very common sexual difficulties so they can lead a healthy, confident and pleasurable life. Unlike Viagra, Ferly is a non-pharmaceutical solution to sexual difficulties with zero negative side effects. This is a welcome relief to the 1 in 2 older women and 1 in 4 younger women that suffer in silence. Ferly was founded in London by Billie Quinlan and Anna Hushlak, but they are now a global team in four countries.

Notpla
Notpla is a London-based startup founded by Pierre Paslier and Rodrigo García González offering an innovative sustainable packaging system. Notpla developed Ooho, a flexible packaging for beverages and sauces that is made from a combination of seaweed and plants that biodegrades in 4-6 weeks and is edible. Notpla raised a post-seed round of £4M in December 2019 to support the industrialization efforts and start commercialization of their products.

Virti
Virti is an enterprise learning solution for healthcare and beyond. Virti was founded by Alexander Young in 2018. The Virti system allows for creation and cross-platform distribution of interactive, immersive (VR, AR, and MR) educational content and while providing analytics that intelligently predicts how a user will perform activities under pressure, such as surgery, sports, emergency response, and military training, all before entering a real environment. Virti raised $2M in a seed round backed by Cedars-Sinai Accelerator, Digital Health.London Accelerator, and Pitch@Palace.

British Leader (UK-headquartered series A+, expanding into the US)

Lantum
Lantum is an online platform that enables healthcare providers to manage their clinical workforce. Founded by Melissa Morris, Ishani Patel, and William Hoyer Millar in 2012, the UK-based startup helps health clinics to manage their freelance physicians, as well as find new ones via a marketplace of high quality vetted physicians. Lantum is on a mission to help save the NHS £1bn in staffing costs.

Limitless Technology
Limitless Technology is an AI-powered crowd service platform designed to engage and connect with customers. Founded by Roger Beadle and Megan Neale in 2016, Limitless enables businesses to connect customers with qualified experts to solve customer service enquiries on-demand, providing a faster and better service for less cost. The platform operates  in over 20 countries and major clients include Microsoft, Unilever and eBay.

Peanut
Peanut is an online platform that connects women from fertility all the way through motherhood.  Founded in 2016 by Michelle Kennedy, Peanut has over 1.6 million active users. The London-based company connects mothers with similar interests while enabling its users to easily meet and share their experiences. In May, Peanut announced $12M fund raising to expand community beyond fertility and motherhood, led by EQT Ventures, with support from Index Ventures and Female Founders Fund.

Quorso
Quorso is a business data analysis software that improves business performance by combining AI and analytics with human intuition and experience. The UK-based company was founded by Daniel Slowe, Julian Mills in 2016. Quorso offers insights that reveal opportunities to improve profits and support managerial decision-making with data.  In December, Quorso announced a $5.2M Series A funding round, led by OMERS Ventures and joined by existing investor Hambro Perks.

Tessian
Founded by Tim Sadler, Edward Bishop and Tom Adams in 2013, Tessian is a next-generation email security platform designed to predict and eliminate security threats, caused by human error, like spear phishing and inadvertent data loss. The company’s platform uses machine intelligence to understand human behavior on email in order to predict normal and abnormal activity, such as receiving a target phishing scam or sending an email to the wrong person, with minimal end-user disruption. In 2019, Tessian raised $42M in a Series B funding round led by Sequoia to accelerate its global expansion, and invest heavily in research and development to expand its product line, joining existing investors; Balderton, Latitude and Accel.

Form Kitchens
Form is a SF-based startup that designs premium modular kitchens and kitchen products. The company offers visual designs, 1-on-1 designer consultation and streamlined installation of kitchens, as well as providing 3D photorealistic visualization, enabling designers and kitchen owners to attain affordable kitchen remodeling without the hassle of traveling to showrooms all over town. Founded by Danny Soos and Tom Sherman in 2019.

Golden
Golden is based in San Francisco and was started in 2017 by Jude Gomila. Golden is using machine intelligence to build a database of knowledge by compiling fragmented information from across the web. Golden then provides functions to customers in order to use this data and drive their own collaborative research with the Golden Research Engine. Golden raised a seed round in 2017 (announced in 2019) of $5m from a16z, Founders Fund, Giga Fund, SV Angel, and others.

KickPay
KickPay is an inventory financing solution designed for ecommerce brands. The company’s software leverages a client’s data to finance their inventory while helping them to pay for the goods as they sell, enabling clients to access financing that was previously unavailable and assists them to improve their growth. Founded in 2014 by Andrew McCalister, Sean Watters, and Stefano Bernardi.

OXO
OXO is like the illegitimate love child of Tesla and Airbnb. OXO matches people who do not want to pay for parking with gig drivers who need cars (to earn money on Uber/Lyft/Doordash). It looks a lot like how autonomous vehicles will operate. The positive climate impact earned an Innovation Award from Stanford’s TomKat. During Coronavirus, OXO’s given cars to frontline workers pro bono; helping get meals and medicine to those who are most vulnerable. OXO was co-founded by James Pelly. They raised a seed round in November 2019, led by Founders Fund.

Zero
Zero is a plastic-free grocery delivery startup led by founder Zuleyka Strasner. The Bay Area-based delivery company grew by 200% week-over-week when stay-at-home orders were issued in California in mid-March. The company offers around 850 items, with everything from fresh produce and meat to chips and popcorn.

Bugsnag
Bugsnag is an application stability management company whose customers include Lyft, Chick-fil-A, Airbnb, Slack, Pinterest, Yelp, Microsoft, Pandora. Founded in 2013 by James Smith and Simon Maynard, the company’s platform helps developers to identify, prioritize and replicate bugs in real-time, enabling them to seamlessly monitor the stability of their applications. The Bay Area-based company is backed by GV (Google Ventures), Benchmark Capital and Matrix Partners.

Yewno
Yewno was founded in 2015 by Ruth Pickering and Ruggero Gramatica. Headquartered in Palo Alto, CA they have offices in London and New York. Yewno’s mission is to turn information into knowledge. Using machine learning, network theory, computational linguistics and classic artificial intelligence, Yewno mimics the way the human mind ingests, processes, stores and recalls information.  Yewno uses proprietary knowledge graph technology as the framework and basis for their solutions.  They seek to empower users, from student researchers to financial analysts, to access and understand the information most relevant and useful for their purposes, in record time. They are used by academic research institutions across nine countries.

Nova Credit
Nova Credit helps newcomers access finance upon arrival in the United States. The company’s Credit Passport® enables international credit history to be seamlessly translated into a U.S. credit report and credit score, which lenders can use to make more informed decisions about applications for new products and services. This award-winning fintech company first started as a Stanford University research project and has since blossomed into the premier cross-border credit reporting agency. Nova Credit has international data partnerships with bureaus in over a dozen countries that allow consumers to share their data with lenders through a single API. In February 2020, they announced a $50M round of funding to grow that business to cover more countries led by Kleiner Perkins. Other investors including Canapi Ventures, General Catalyst, Index Ventures, Nyca Partners, Sound Ventures, and notable names including baseball legend Alex Rodriguez and the Edge of U2.

Superhuman
Superhuman was founded in 2014 by the founder of Gmail add-on Rapportive Rahul Vohra, with Conrad Irwin and Vivek Sodera. Superhuman’s technology is designed to speed up everything about using email, while also bundling in features like snoozing, scheduling, read statuses, undo send, insights from social networks, and more. In February, Vohra  and Eventjoy founder Todd Goldberg announced a $7M angel’s fund.

Tray.io
Tray.io is an automated solution for organizations. The company was founded by Rich Waldron, Alistair Russell, and Dominic Lewis based on their own work issues. With the Tray Platform, citizen automators throughout organizations can easily automate complex processes through a powerful, flexible platform, and can connect their entire cloud stack thanks to APIs. In November last year, they announced the close of a $50M Series C funding led by Meritech Capital, with previous investors Spark Capital, GGV Capital, and True Ventures.